WE ENGINEER AND CREATE BIKE SEATS FOR YOUR
HEALTH AND PLEASURE TO PROVIDE A TRULY
PAIN-FREE RIDE FOR ALL CYCLISTS.

In 1983, Hobson pioneered a zero perineum pressure bike seat. HobsonSeats was the first bike saddle company to offer a customizable, ergonomic, pain-free, noseless bi-saddle. The outstanding design features have stood the test of time and have proven to be the solution to the pain cyclists commonly experience.

Research studies by top Urologists, Physical Therapists and Chiropractors all prove unequivocally that HobsonSeats provide a much healthier, better solution than standard bike seats. With the success of the Original Easy Seat, the Easy Seat II and Pro Hub X2 were added for more aggressive riding. And thanks to thousands of testimonials from overjoyed customers our mission to reshape the world of biking continues.

WHY A HOBSON SEAT IS A HEALTHIER BIKE SEAT:

Recent studies confirm that an increased prevalence of erectile dysfunction among cyclists is due to the use of the standard narrow saddle. Alternative designs, such as HobsonSeats, eliminate this problem. 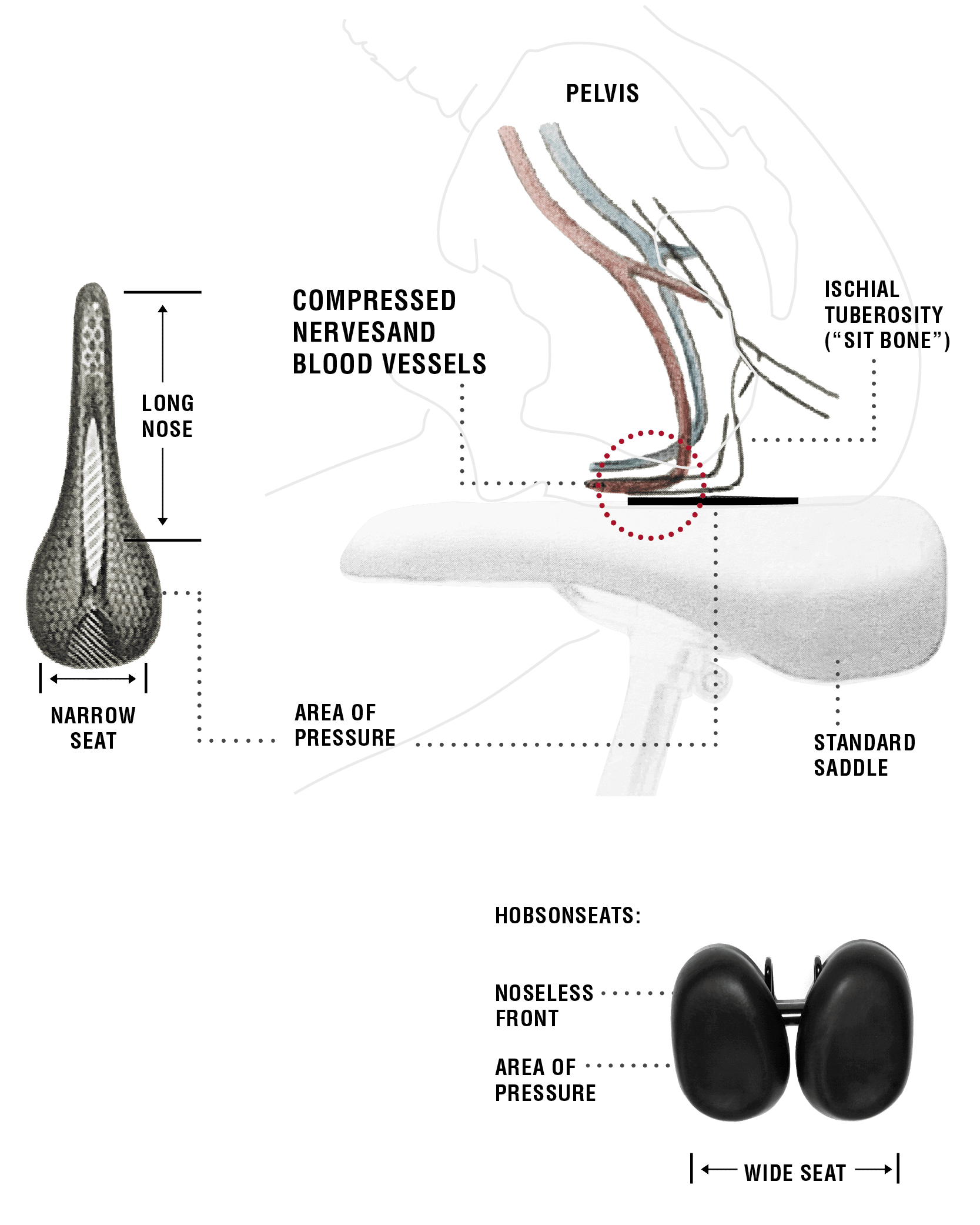 The standard saddle, with a narrow rear seat and long nose fits inside the pelvic bones used for sitting. The rider’s weight is focused on the perineum, compressing nerves and blood vessels. The reduction of blood flow can become permanent.

The noseless HobsonSeats, eliminates the nose and provides a wider seating area. The cyclist’s weight is placed on the bottom of the pelvis, the “sit bone,” eliminating the pressure on nerves and blood vessels.

Below is an excerpt from LA Times editorial, quoting Dr. Irwin Goldstein, a Boston urologist, and Dr. Steven Schrader, a reproductive health expert who studies cycling at the National Institute for Occupational Safety and Health.

The link between bicycle saddles and impotence first received public attention in 1997 when a Boston urologist, Dr. Irwin Goldstein, who had studied the problem asserted that “there are only two kinds of male cyclists -- those who are impotent and those who will be impotent.”

Scientists also stepped up their research. Since 2000, a dozen studies have been carried out using tools to see exactly what happens when human anatomy meets the bicycle saddle.

“There are only two kinds of male cyclists -- those who are impotent and those who will be impotent.”
-Dr. Irwin Goldstein, Urologist

In men, a sheath in the perineum, called Alcock’s canal, contains an artery and a nerve that supply the penis with blood and sensation. The canal runs along the side of the bone, Dr. Goldstein said, and when a cyclist sits hard on a narrow saddle, the artery and the nerve are compressed. Over time, a reduction of blood flow can mean that there is not enough pressure to achieve full erection.

In women, Dr. Goldstein said, the same arteries and nerves engorge the clitoris during sexual intercourse.

“We wear helmets and knee pads,” Dr. Goldstein said. “But no one thinks about protecting the crotch.”

“We wear helmets and kneepads, but no one thinks about protecting the crotch."
-Dr. Irwin Goldstein, Urologist